After the death of his brother, Richard The Lionheart, John waited fifty days before he was crowned King of England.  Having been Count of Mortain and given the title Overlord of Ireland by his father, Henry II, John married the daughter of Robert Fitzharding, Earl of Gloucester.  All this entitlement and bestowing of land and titles meant that John was a regular visitor to Bristol and its surrounding area.

Scatterings of information exist prior to his coronation and it is a matter of piecing the puzzle together and coming up with a "best guess" as to how much time he actually spent in Bristol before his ascension to the throne.  In fact, my current work in progress surmises what might have happened during a period when he may have resided in Bristol Castle, where he concocts an ambitious plot to usurp the Crown from his brother.

However, after his coronation the records of John's visits to Bristol are remarkably accurate.  For example, on 5th February 1205, he wrote to the merchant ,John De La Warr commanding that his Justiciar, the Earl of Essex, be presented with "20 casks of his good wine at Bristol."  On the 12th of the same month a payment of 41s, 6d (41 shillings and 6 pence) be made to transport "30 tuns of wine from Bristol to Tewkesbury." 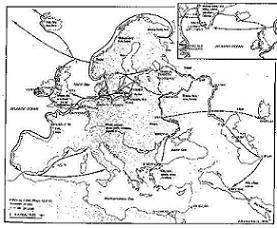 The port of Bristol had, since the time of the marriage of Henry II to Eleanor of Aquitaine, been the centre of wine importing from France.  Vintners & Merchants brought thousands of barrels into the port each year and the reputation and quality of the product was beyond question.  To give you some idea of the money spent by John on wine, in April 1205 he ordered that a payment of £568 be paid to several merchants in the town for wine he had ordered.  John was so enthusiastic about the wine procured by Bristol merchants that he regularly had barrels sent to castles around the country, where he would be staying or entertaining.

For the next several hundred years, Bristol would dominate the wine trade and trading links with France, Spain and Portugal still exist today.
Posted by Unknown at 15:19 No comments:

“Writing Bristol’s History”, has been attracting some amazing attention in recent weeks.  I hadn’t posted anything for around three years, due to illness and personal circumstances.  However since I began writing as Sir Read-A-Lot, it has had nearly 300 page views!!  I could not believe that so many people had found it and read the content, even though I had not contributed anything new since 2009.

So, it is with great pleasure that from Monday, July 2nd “Writing Bristol’s History” will be re-launched!  My aim is to provide interesting and informative content that compliments my writing and my passion for history.  I do hope you will find time in your busy schedule to take a look at it and support it in the same way you have generously followed Sir Read-A-Lot.
Posted by Unknown at 15:39 No comments: 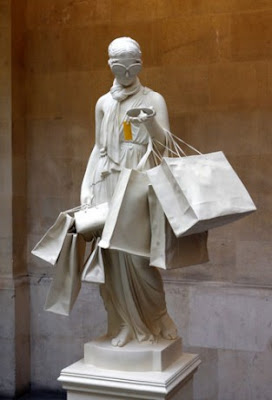 One of Bristol's current citizens is making history as we speak. Banksy, the world famous "Guerilla Artist" has been making a name for himself for over 10 years with his tongue in cheek social commentary. 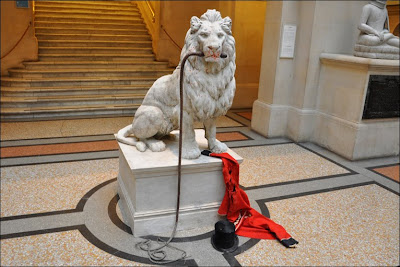 Many people are aware of his graffiti - in Bristol and in London, but did you know he has also daubed on the "Peace Wall" in Gaza?
Over the summer of 2009, the Banksy Vs Bristol Museum has been drawing in hundreds of thousands of people. This amazing exhibition was put together in almost total secrecy and every piece was created specifically for the exhibition. Damien Hirst even gave Bansky an original piece of his own work for him to complete! Using one of his recognisable rat painters, many would think it has improved Hirst's work considerably.

Other works include a lion getting his own back on a lion-tamer, a scene of urban deprivation and the Venus De Milo as a WAG and Michaelangelo's David as a suicide bomber. Controversial, misunderstood, sticking two fingers up at the world or a practical joker? How ever you describe
him, Banksy is making his mark and everyone is talking about him!
It has been reported that Bristol Museum paid Banksy the princely sum of £1.00 to host the exhibition. It has put Bristol on the the cultural map this year and coverage has been worldwide. Queues outside the museum have snake back hundreds of yards and the current waiting time is around 6 hours, doubled from the average of 3 hours last week.
Competition
As such, I am giving away a copy of "WALL & PIECE" - a collection of Banksy's work from around the world - put together and described by the man himself.

The competition is free, in order to enter all you need to do is leave a comment on Banksy at the end of this post. If you are a follower of my blog, leaving a comment will get you 5 entries, if you introduce someone to my blog and they become a follower you get another 10 entries! You MUST leave a comment to enter the giveaway!
The competition runs until 7th September and is open to all, regardless of country of residency.
Good Luck! 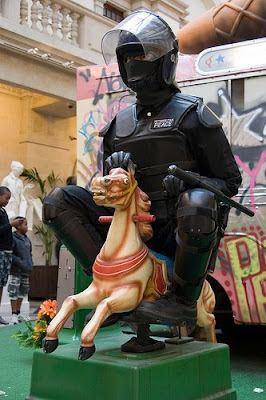 Further to my previous post outlining the history of Bristol's New Gaol, I found details of the first and last public executions carried out there.

Hanged 3 days after his 18th birthday, on 13/4/1821, John Horwood was convicted of the murder of a girl he was infatuated with. Eliza Balsum was hiton the head by a large stone, thrown by Horwood, as she crossed a stream.

People crammed onto the road along the New Cut, outside the entrance where the hanging was to take place, to witness the event. It is recorded that so many people wanted to see it, that there was a real danger of people falling in the Cut - there were no safety barriers at this time.

The tale is morbid enough as the death was not a clean or pretty one, but it takes a gruesome turn. After he was cut down, Horwood's corpse was given to Dr Richard Smith of the BRI who taught surgery and used bodies to teach dissection.

He used his body in the normal manner, allowing student's to dissect it and practise surgical procedures. Afterwards however, the boy's skin was removed before preserving and tanning it. A ledger outlining the legal case, trial and execution of Horwood was written in a ledger and the skin was given toa book-binder who covered the ledger with the unusual leather. embossed on the cover were a skull and crossbones in each of the corners and a gilded title "Cutis Vera Johannis Horwood" ("The Skin of John Horwood").

It was kept for many years in the basement records office of the BRI until it was found and transferred to the Bristol Records Office. Inside the ledger, a bill for ten pounds from the binder was found. The ledger is now too fragile to be handled, however microfiches of the contents are available for viewing.

The last execution was of a servant girl young girl in 1849. Sarah Harriet Thomas was convicted of the murder of her elderly employer, Miss Elizabeth Jefferies who was found beaten to death in her own bed. On the day of the sentence, she was dragged kicking and screaming to the gallows begging for her life.

William Calcraft, England's longest serving hangman, was charged with carrying out the sentence and it was reported he was greatly disturbed by the victim's youth and attractive looks. she pleaded for clemency right up to her final moments. Despite the normal distasteful jokes and comments, many citizen's never forgot the way Sarah died - it was such an ordeal that even the Prison Governer fainted.
Posted by Stuart MacAllister at 08:23 No comments:

I received an email recently asking me about the New Bristol Gaol, situated on the New Cut. I didn't know much about the place other than it was once a gruesome establishment where they used to hang criminals, so I did some research and found it to have a fascinating and morbid history.

Commissioned in 1816 by the city council for a budget of £60,000 - in today's money that would cost around £2m - the New Gaol opened its doors to inmates in 1820. It housed a maximum of 197 prisoners of mixed sex who were, for that time, unusually housed in single cells measuring around 6ft by 9ft.

When constructed reports claimed it to "have beautiful views of the surrounding countryside" as well as being "unequalled throughout England for convenience, health and construction." Even the 20ft boundary wall was built from variegated marble!

Once prisoners were in situ though, conditions deteriorated very quickly. The dedicated well provided water that was undrinkable, the tiny windows did not allow air to circulate and during the winter it got extremely cold.

The granite built gatehouse flat roof was built with a trap door, specifically for the purpose of hanging criminals. The familiar and more humane 'long drop' method where the victim's own bodyweight combined with the fall broke the neck, had yet to be developed. The victim was, at this time, bound hand and foot, and then dropped through a trap door on a short rope. This lead to the victim to strangle to death over a period of minutes - usually with much writhing around and a huge amount of distress.

By 1872 the Home Office had decided that the prison was no longer fit for purpose and ordered a larger and more appropriate building be constructed. The New Gaol was replaced by Horfield Prison in 1884. The building fell into ruin, eventually being sold to the famous Great Western Railway in 1895. They demolished most of the walls and inner buildings to use the site as a coal shed.

The only visible evidence of the Gaol today is the front gate and portcullis entrance. It has been given Grade 2 Listed status by English Heritage, but does face an uncertain future as the land it sits on is privately owned and it is understood the owner is looking to develop the site. Whatever happens it is hoped this part of Bristol's history is kept intact and not erased from the landscape.
Posted by Stuart MacAllister at 07:25 3 comments:

Anyone interestedin Egyptian novels, would do well to read the lovely Michelle Moran!

Allie - otherwise known as Hist-Fic-Chick is doing a couple of giveaways on her blog of two of Michelles novels, The Heretic Queen (http://histficchick.blogspot.com/2009/08/egyptian-dreams-giveaway-part-1-heretic.html) and Cleopatra's Daughter (http://histficchick.blogspot.com/2009/08/egyptian-dreams-giveaway-part-2.html) which is not being published until 15th September!!!

Follow the links and win yourself some wonderful books, by a wonderful writer.
Posted by Stuart MacAllister at 13:16 No comments:

Congratulations to Carine & Terry Burns Des Vos, who have won a copy of Brethren, in my inaugral book competition. If you could email me with your details, I will post your prize!

Thank you very much to all who entered - keep following my blog for more competitions and articles about the history of Bristol .
Posted by Stuart MacAllister at 16:43 1 comment:

If you would like to contact me, please email me at: bristolhistoryblog@yahoo.co.uk I look forward to hearing from you.